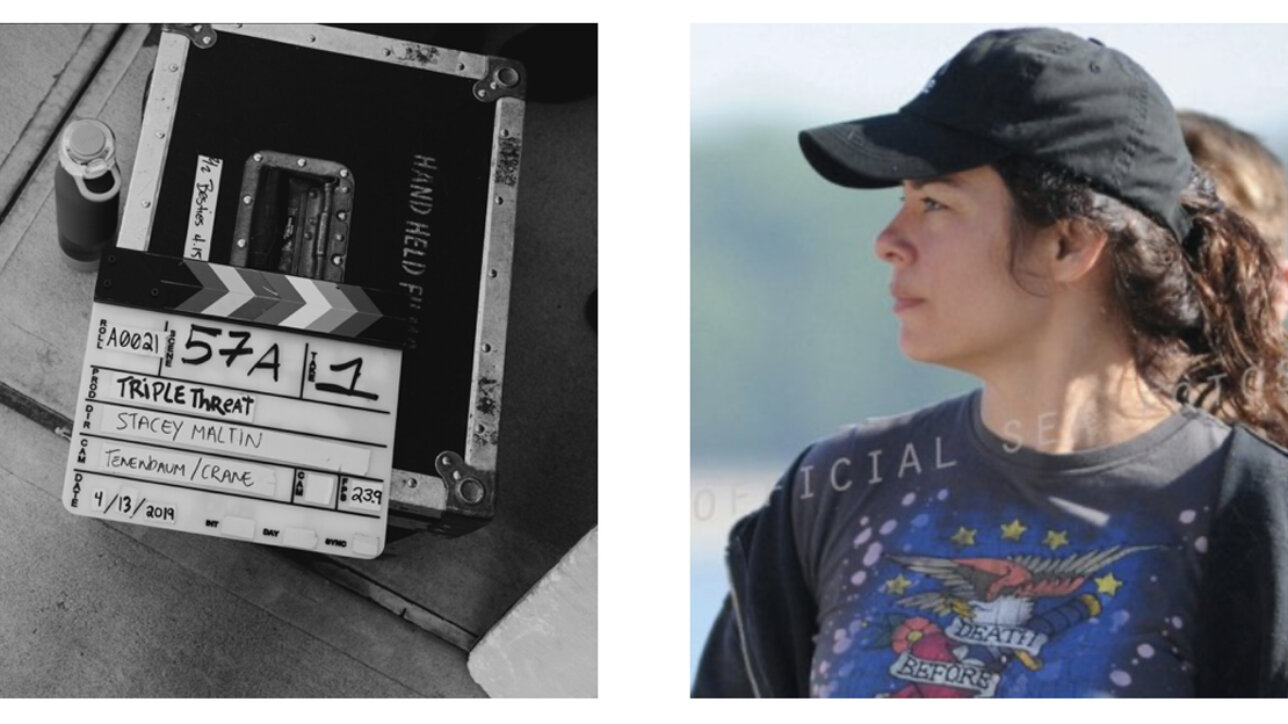 What have you been surprised to find through the editing process?

I’ve learned so many things. Trusting the process. Being patient. Being open to change. It’s my first time working for a director other than myself, which felt different than how I feel about my own films because you are handed a very important piece of someone else to take care of, and that is a huge responsibility. I’ve only felt that in the past when being hired to rewrite a script. I really have to listen, not only to her vision, but trust my instincts as a storyteller when wanting to diverge from her vision, but also always knowing that it is her story I am serving, which for me has always been the highest calling. To serve the story. So, it’s lovely to be in the process of serving the story of another director who has her own unique, strong vision and voice. I also have reaffirmed my love of collaboration. I’ve missed it. I live to surround myself with people who strive to be something greater than themselves and who have the guts to go for it. To collaborate with people who have insane skills where I may lack them and offer me the opportunity to grow is amazing. So the collaboration, the melding of these talents together is fucking exciting stuff for me. I think people see me as a leader, and a director, but it’s lovely to also be known as a team player. That’s been a fulfilling part of the editing process. Being on the team. I love bouncing ideas off each other. Talking story. I love it.

What do you love about working with Stacey Maltin & Besties Make Movies?

As a first-time feature editor, not many people would take a chance. But women [and underrepresented people, POC and NB] get how to smash through the gatekeepers because they have been keeping us from opportunity for so long. So, what Besties has been doing has been exciting to watch, as much as what Ava DuVernay and Alma Har’el are doing. Busting down the doors and reaching back and lifting up others with them. It’s a concept I’ve been practicing all my career, even back in 2010 I started a group called The Lab – NY which was based on this idea that collectively we can support each other and grow up in this industry together, and create opportunities for one another, but The Lab – NY in my mind failed on its vision because not everyone has that mindset – so many people are out there just to get theirs, but in my experience, it is when you give, bring your tribe with you, that you find greater success and fulfillment. So, when I began to work with Stacey and Mars I realized we were essentially cut from the same cloth and that they had somehow rooted themselves in a way that they were making that concept work for them and their tribe. Inclusive. That’s exciting to me. It’s in my DNA to lift up others as I ascend and I feel it’s threaded deeply in them as well. I love that about them. I’m inspired.

One of the most important parts of the experience in working with Stacey is truly the trust and respect she gives me. She trusts my input. It’s a process to edit and recut, and cut again. Trying to find the nuances of the story and the rhythm of the film itself. It’s the first time [outside of my amazing writing partner of years] that I have been able to be 100% honest, even brutal, and it is received without ego, and respected and gives me incredible confidence in our work together that we can really listen to one another, even if it can be tough. It’s very rewarding to work with Stacey in this way.

What is your process of working on the edit? How do you maneuver disagreements, etc?

I work very intuitively. I don’t think much when in the process, but feel my way through it, over and over until it feels right to me. I do at some point sit back and think it through intellectually but 90% of my process is through trusting what I feel. Stacey is very hands on. From the beginning she had assembled a cut because she’s comes from an editing back ground as well, and of course she knew every scene and every take by heart. I had some catching up to do. We are also working remotely which is not particularly an obstacle except when Premiere has given us some fucked up technical issues. We then come together to look at cuts and discuss and brainstorm. The most important decision ultimately was finding the right structure for this film. The first cut was non linear which was not the way it was written, but I love non linear storytelling so it was mostly about finding the right moments to switch the three timelines we were working with, but at one point close to getting into the fine cuts Stacey wanted to recut the film linearly. The film was working but she needed to follow her impulse and explore it. So she set out to reassemble her “love cut” so I would have a new blueprint to work with and we both felt that it did work better for this film. The process is great because you are exploring and cross cutting and making discoveries of unexpected moments and finding out how to unfold the story in a way that is not in the original conception. It’s fun. I do this a lot in the music videos I’ve directed and edited, or in other small form content I have edited but an entire feature film. It’s a beast! But an exciting challenge. It’s a puzzle, but a fun one because of the way Stacey has trusted me with her work. Ultimately this is Stacey’s film and I see myself as someone who is there to question, challenge, show different ideas, and help her find all the possibilities of the story, finding the characters journeys. I make suggestions, but it’s so generously and respectfully collaborative — we both have strong opinions and the gift of being able to be completely honest only serves to make each of us better at our work. Often it is ‘I see what you did, I prefer what I did, but you’re the director, and I am here to serve your vision.’ And it’s all valid. It’s easy not to take it personally because you are both working for the same goal. and we definitely have disagreements on how a scene of a sequence should be cut. But my job is to play devil’s advocate until she is 100% that she wants a scene or sequence in a certain way and then my job is to make that work.

Without giving too much away, what is your favorite scene to edit at the moment, what is the most challenging scene to edit. Why?

I don’t think I had a favorite scene to cut. I love so many parts of the film. At the moment I think my favorite part may be fleshing out one of the supporting characters, Chiara, and building her character arc. The biggest challenge is not falling in love with a cut, or a line or being married to a scene but being willing to sacrifice these things for the bigger picture. That I feel in general is one of the toughest obstacles. Making a film is a miracle in itself, making a good film is a work of fucking magic.

What else are you working on, where can we find you?

At the moment I have several film projects in development, some in the US but most in Spain, and/or US-Spain crossover. Spanish content is exploding worldwide due to Netflix dropping a hub there and HBO and other majors are looking to get into the game. All of my projects are loaded with exceptional A-list actors from Spain, one of my features, I wrote and will be directing, is very close to moving into pre-production. Since my last film, THE SEA IS ALL I KNOW, I have buried myself in work to have an anchor in that space and I am poised to be on that tidal wave.

I am also super excited to be directing a music video in NYC and to continue doing editing work with kick-ass talent like Besties who are fearless and making things happen.